There’s a story, passed down from two Unama’ki/Cape Breton Mi’kmaq elders, that tells of a woman who gave birth to a child in the 1920’s. Unfortunately, the mother developed a severe skin infection on her chest and was therefore unable to nurse the newborn baby, putting the life of the baby at risk. It was then that the Mi’kmaq midwife made a maskwiomin ointment from birch bark extract over an open fire. The midwife applied it to the mother’s chest, healing the skin infection and saving both mom and baby.

It is through these traditional oral histories of the Mi’kmaq that Maskwiomin Mi’kmaq Skincare was realized. 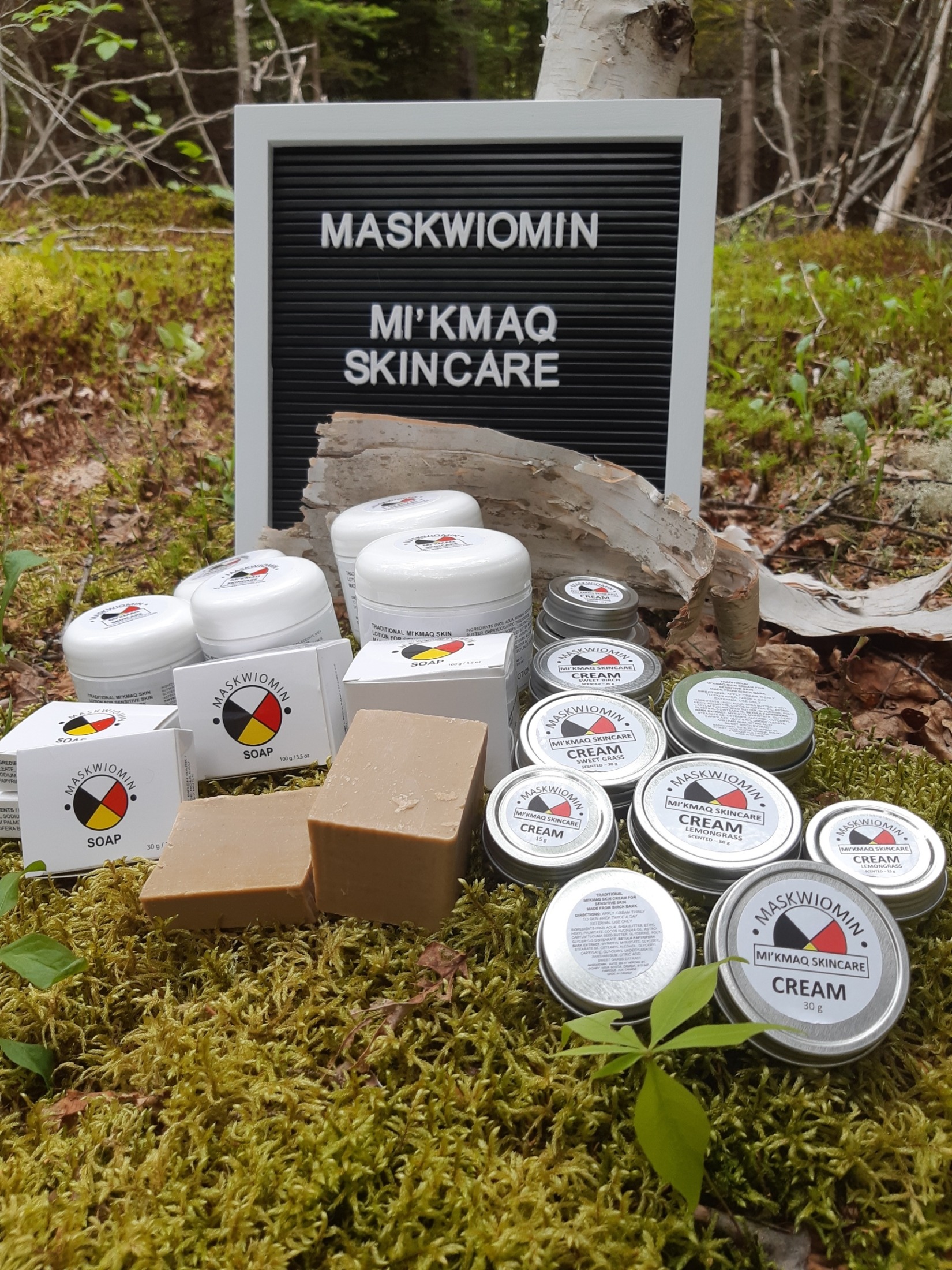 Over 25 years ago, Tuma Young, ethnobotanist, lawyer, and Director of the Donald Marshall Jr. Mi’kmaq Legal Institute, pieced together the stories from Elders of maskwiomin and how the birch bark extract is produced in the traditional Mi’kmaq way. That knowledge included taking a can filled with birch bark, poking a hole in the bottom, then placing it over an open fire and letting the liquid extract drip out.

Eight years ago, as Tuma was teaching these methods in his courses at Cape Breton University (CBU), he connected with Dr. Matthias Bierenstiel, a chemistry professor at CBU, who immediately began studying the chemical components of the complex liquified birch bark extract. Today, the two of them have over a million dollars in research funding, and hold the largest Canadian Institute of Health Research at CBU, at over $850,000, to learn more about birch bark extract; to find out what it is, what can it do, and how it can benefit Canadians.

From the beginning, Matthias and Tuma adopted a two-eyed seeing methodology; an Indigenous framework that embraces the strengths of Indigenous knowledges and ways of knowing in one eye, and with the other eye, the strengths of mainstream science, and use these two eyes together, in harmony, for the benefit of all.

For Dr. Bierenstiel, the challenge was replicating the low-yield campfire methods of extracting birch bark, into a more high-yield method that mimics the campfire, while in a controlled laboratory. Through many trials they were able to develop an extractor that accurately mimics a campfire, with excellent reproducibility, that allowed them to create “batch-to-batch consistency,” as Dr. Bierenstiel says.

According to the Canadian Dermatology Association, over 25% of the population has a chronic skin condition. Many over-the-counter skin care products, creams, ointments, etc., contain harsh chemicals, such as cortisol and steroids, that aren’t recommended to be used long-term. Maskwiomin provides an all-natural ingredient alternative to these other products. The Mi’kmaq have been using birch bark as a broad-spectrum antibiotic for thousands and thousands of years, and through Dr. Bierenstiel’s research into birch bark extract, he found anti-inflammatory, anti-itch, and pain relief properties. For them, it’s the synergy of all these compounds found naturally in birch bark that makes it work so well, in addition to the already established medicinal components. 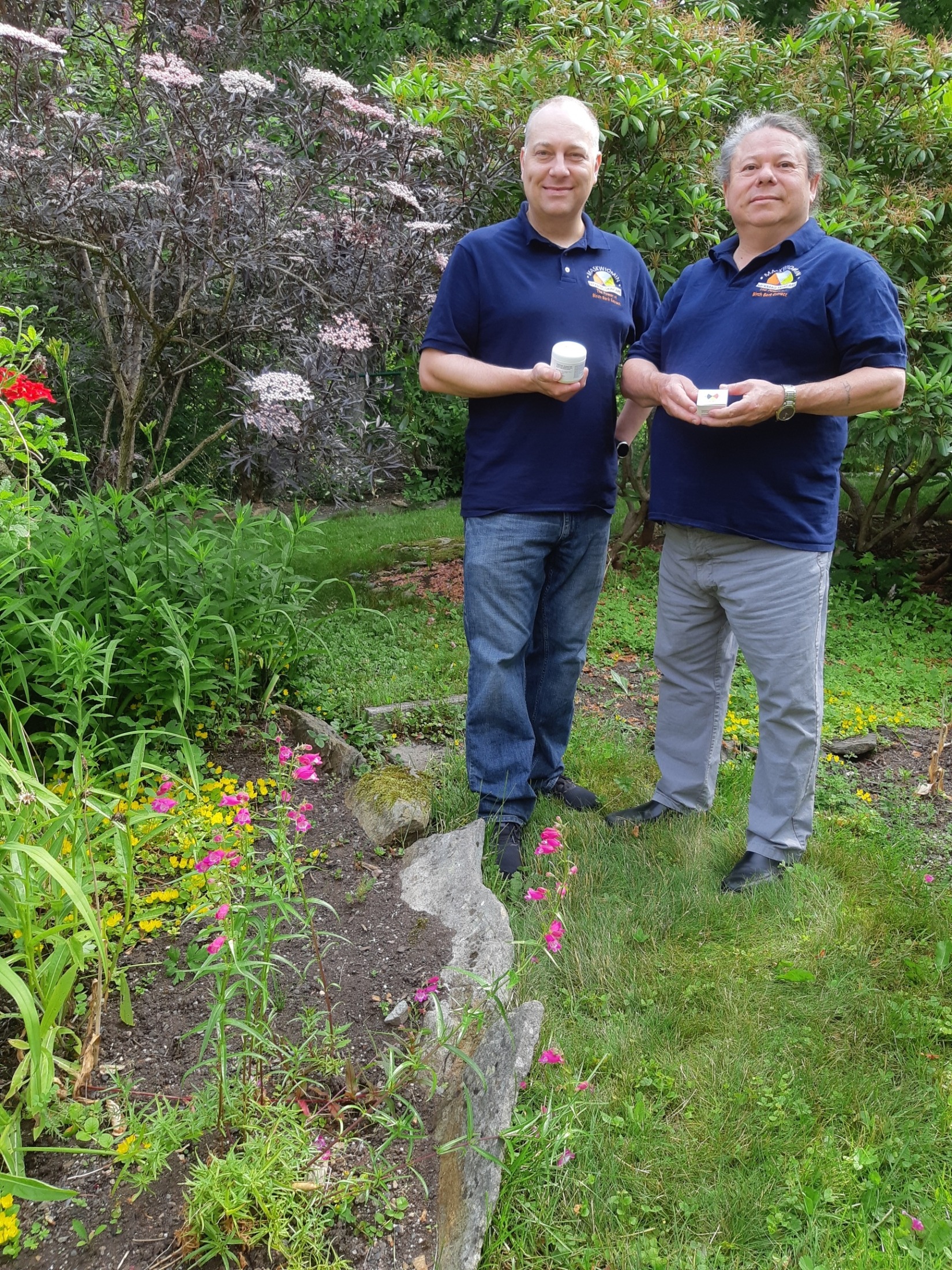 “With the [birch bark] extract itself, the complex mixture, how can one chemical compound be for an acne outbreak, for eczema, for psoriasis, for all of these things?” says Dr. Bierenstiel. “I think this is what was really revealing. The European, pro-Western approach is usually rooted in Greek philosophy, they like simplicity. And where the makeup viewpoint of birch bark is holistic, it’s a divergent approach, rather than a conversion approach. And so, what we actually think now is that the many compounds in that extract work together like an orchestra.”

Through their ethical commercialization process, Maskwiomin creams, lotions, and soaps are all licensed by Health Canada for cosmetic skincare, and are currently sold in eight stores around the Sydney area, one in Baddeck, and they have continued interest from stores in the Halifax area and in New Brunswick. Although they’re not going to stop there, but continue expanding right across Canada, they want to make sure they do it the right way, and give credit where credit is due. As a result, Maskwiomin is currently partnering with the Membertou First Nation community to give back to the community where these oral medicine histories originated from; ensuring the continuation of knowledge to Mi’kmaq elders and youth in the community.

If you wish to learn more about Maskwiomin you can find their story and their products at: https://maskwiomin.com/